Several years ago I was in a copy shop in Manhattan, hurriedly finishing off some Aramaic calligraphy on a freshly printed document, when a stranger approached me with an expression of complete glee.

I smiled and nodded, without breaking my concentration, while he continued to convey his astonishment.

“You’re making an ancient document in a busy Kinko’s— what a trip!”

Maybe so, but I was in a rush. I had just a few minutes before the scroll was due at the wedding down the block, so I thanked him for his attention and went back to my work.

In the years since that encounter, I’ve had more chances to explain my craft and its anachronistic delights. In an era of massive changes in how we marry — we now have same-sex unions, destination weddings and celebrant-led ceremonies — Jews are still observing the 2,000-year-old tradition of signing a ketubah.

If you’re starting to plan a wedding, chances are good it’s the first time you’ve started thinking about a ketubah.

And if you’re a contemporary person with some feminist sympathies, the original ketubah might strike you as a patriarchal throwback. 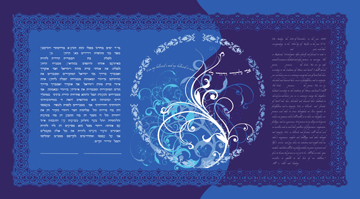 Here you have a text that states exactly what the groom is going to provide the bride in exchange for her dowry of jewelry, gold and furnishings. But during the Hellenistic period (fourth through first centuries BCE) — when ketubahs were first used — this contract was a progressive innovation!

Without such a legal promise, a wife might be left without any means of support if her husband died or divorced her. It was actually pretty radical that the rabbinic sages instituted an agreement that would improve a woman’s social status by protecting her economically.

The groom’s actual pledge reads, translated from Aramaic: “I will give you love and I will provide you food and clothing and necessities and your conjugal rights according to accepted custom.”

In contrast, the bride doesn’t have to pledge anything. What a deal!

But even in the sunlight of proper historical context, there’s still a lot of objectionable stuff in the ketubah. The bride is referred to as a virgin, for one, and the underlying premise is that she is pretty much a piece of property being legally transferred from her father to her husband. Not very romantic.

As you can imagine, a lot of couples aren’t thrilled about this antiquated language. Thankfully, unlike the ritualized writing of a Torah, the writing of a ketubah and the specific text are not bound by halachah, so there are now dozens of egalitarian versions available, ranging from strictly legal to sugary sweet. Depending on the rabbi’s stipulations, the couple can even author their own text.

Likewise, there aren’t any guidelines for the decoration of the contract, though it was originally made on parchment with hand-written calligraphy.

I’ve seen gorgeous examples of historical ketubahs from all over the Jewish world; my favorites include some ornate ones from Renaissance Italy, Islamic-inspired tableaux from medieval Egypt, and a first-century papyrus found in a cave in the Judean desert.

Local artists usually made these works, and they passed down the craft through apprenticeship. Even today, there are no classes on ketubah imagery or degree programs in Hebrew calligraphy. My general background in printmaking, painting and digital art has been useful, but I had to learn on the job how to proofread an extinct language (and how to cater to those bridezillas).

Art for a 21st century ketubah might mix abstract designs, floral motifs, or watercolor landscapes with all sorts of personal and Jewish symbols.

I’ve done digital collages that incorporate portraits of the couple, photos of their pets and snapshots of their hometowns. In fact, there’s no limit to the amount of crazy requests these nearly-weds throw at me, hoping to get their very own Chagall-inspired canvas that includes two zebras, six camels, a Napa vineyard and a quotation from Kerouac.

After fielding so many divergent aesthetic requests, I realized that couples view the ketubah as a time capsule of their love. Because they imagine that it will become a family heirloom, they want it to embody their romantic spirit and their most formative influences.

I once had an interfaith couple (Pakistani and American Jewish) who requested an exact reproduction of an uncommonly cheery Rothko painting. In addition to a traditional Hebrew text, I hand-lettered a passage from Khalil Gibran’s “The Prophet” in Sindhi script across the artwork. They said that they wanted their future children to see how beautifully cultures can blend together.

So while the ketubah once protected the wife from hardship, it is now, in this age of globalization, a symbol of enduring cultural commitment.

Jessica Kraft is a San Francisco-based artist who designs ketubahs, paints murals and teaches at U.C. Berkeley Extension. You can find her work at http://www.ketubahkraft.com.