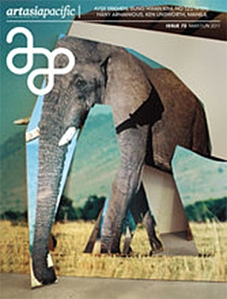 While often stylistically compared to Magritte, the renowned Indian painter Surendran Nair adamantly rejects the Surrealist label. His paintings do not reveal a landscape of the unconscious but rather are dramatic tableaus, flatly and precisely painted like murals on human-figure-sized canvases. The nine paintings in this show are part of a series begun in 1999 called “Cuckoonebulopolis.” This is Nair’s compound word for an alternate universe loosely inspired by ancient Greek playwright Aristophanes’ The Birds, in which the avian inhabitants of a city in the clouds mediate between the gods and their earthbound subjects. With two of the series’ five subseries, “Elysium” (2010) and “Doctrine of the Forest” (2009) featured here, the paintings all speak to human and animal relationships with the divine.

Penetrating the fourth wall of Nair’s drama requires a basic familiarity with Hindu deities and Kathakali, a 17th-century dance and theatrical tradition based in the artist’s native Kerala that employs fanciful makeup, unusual costumes and a lexicon of eye movements and hand gestures accentuated by props. “Doctrine of the Forest” refers to one of the origins of Kathakali in which performers danced in the woods and made costumes and makeup from herbal plants. The paintings in this subseries feature posing actors who refer to figures in Hindu legend. In Lovers (Shri Parvathi Vi Kshanapriyan & Kaushiki Puramjanam) at Playful Leisure. The Doctrine of the Forest (Cuckoonebulopolis) (2009), a purple woman with outstretched arms, lolling tongue and bulging eyes hovers threateningly above her supine male consort. He appears serene, resting his head on a small golden bull while his leg oddly supports a calico cat. Above his head, a deer calmly counterposes his lover’s wrath. The couple is immediately recognizable as the demoness Kali and the god Shiva. Nair has strewn a few of their totems across the dark stage to alert the audience: Shiva’s trident, Kali’s fanged grimace and an eight-armed dagger-wielding statue. Formally, the painting speaks of divine balance—each element is geometrically and energetically aligned with another, and the visual symmetry underscores a theme of harmony between man and woman, good and evil, life and death.

In Obviously: The Doctrine of the Forest (Cuckoonebulopolis) (2009),Saraswati, goddess of knowledge and the arts, is shown with her sitar-like instrument, the veena, and a pair of swans. The animal consorts of Hindu deities, which serve to emphasize particular divine attributes, loom large in Nair’s universe. Sometimes they are vehicles, sometimes companions, sometimes just inert ornaments. In two paintings from “Elysium,” the concept of the divine vehicle is reversed. A procession of men carry the frame of a temple in Elysium (Cuckoonebulopolis) (2010),while in one of the more amusingly banal works in the collection, a bicyclist supports a camel in Yamani Bilawal: Elysium. (Cuckoonebulopolis) (2010).

Kathakali elements also emerge in Indra: An Actor Performing the Parabasis of an Imaginary Play – Doctrine of the Forest (Cuckoonebulopolis) (2009), which depicts the titular god of war and storms, who is flanked by two propped up clouds, one resting on an elephant statue, the other on a thunderbolt. His face is vividly made up with bands of color that symbolize an inner quality of his character—the overall, paradoxical effect here is calm rage.

The same style of makeup appears in the central piece of the show, Neti, Neti. The Doctrine of the Forest (Cuckoonebulopolis) (2009), which is also a striking self-portrait of the artist. The title is a saying from the Upanishads that means “not this, not that.” It is an aphorism for negative theology: as it is impossible to succinctly express the essence of God, one should not even try. Rather, one can express clearly what God is not. The painting’s bare-chested figure stands in profile, contemplating a flaming trident and gesturing with three arms, one of which is visibly attached to him with string. Decoding the accoutrements in the painting would provide enough material for a graduate thesis, but the title urges us to stop searching for meaning through identification and naming. Such distractions keep us from achieving what actors strive for: meditative focus.

Press Enter To Begin Your Search
×