Koki Tanaka: “Nothing Related, But Could Be Associated”
Yerba Buena Center of the Arts, San Francisco…

Merging Japanese modesty with Californian gusto, Koki Tanaka’s solo exhibition of “temporary sculptures,” photos, drawings and videos embraces and warps the banality of daily life. Everyday Statement (Cheese Toast) (2010) is a photograph of a piece of bright orange cheddar forming a triangular peak on top of a slice toasted bread, challenging us to note the possibility of artistry in our own food preparation. Why make art out of your breakfast? Tanaka’s Everyday Statement seems to be “why not?”

The exhibition continues with four life-size photos of the artist sporting a common hipster uniform–skinny jeans and plaid shirt–and bowing towards a paper plate he is holding. In process of blowing (2010), it is a windy day, and a cloud of powder from the plate is blowing over his face, masking it entirely in a diaphanous white puff.  The scene is more strange than comical—perhaps it concerns kabuki makeup, perhaps a cocaine faux-pas. There are no curatorial labels offering clues. 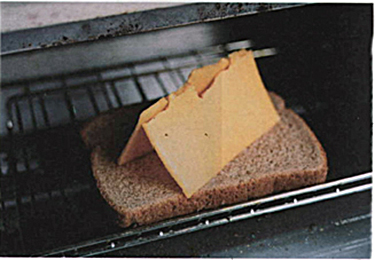 Most of the exhibition is encased in a temporary plywood structure which evokes a cheap set, and provides the necessary backdrop for three video works and numerous sculptures that have been fashioned from 99-cent store merchandise, including a scattering of dozens of blue plastic cups. The cups theatrically suggest the aftermath of an art school studio’s impromptu all-night vernissage, while also evoking today’s prevalence of cheap consumer goods. While most of us could, theoretically, get by with just one cup, we use hundreds each year, and one of the videos speaks, without proselytizing, to this wastefulness. Cups on a Car (2010) shows a young woman  approaching a compact sedan on a rooftop parking lot. She places her disposable cup on top of the car. The camera pans out to reveal that the cup has joined a collection of cups that remain on the roof, without a wobble, as she drives away. Tanaka shows us how we needlessly collect things, oblivious to our already enormous piles of stuff.

A second video, the 28-minute A Haircut by 9 Hairdressers at Once (Second Attempt) (2010), the artist takes on an entirely different set of issues, here commenting on the pervasiveness of reality television and the possibility of true artistic collaboration. The work records a live social experiment wherein a brave model allows the hairdressers, picked from top beauty salons in the city, to take turns snipping, whacking and coiffing her hair. The ultimate goal, set up in the video, is to style her as a “futuristic anchor-woman,” but there is no single auteur directing the final look: we must bear witness to the tentative negotiations and sometimes painful aesthetic compromises that emerge from the process. While the viewer may be focused on whether the stated end-result has been achieved, (admittedly, the model’s hair is choppy and uneven by the last scene), one is also riveted by the banal, routine actions of a haircut—something to which one has never paid so much attention before.

Tanaka grew up in Tokyo and is now living in Los Angeles; his Japanese influences, equally important to the American pop-cultural quotation in his practice, tend to be more high-minded and historical. In the exhibited set of 13 pencil drawings entitled History is written from someone else’s perspective, someone you don’t know. Making our own history requires each of us to rewrite it from our own point of view (2010), Tanaka hand-traced documents relating to contemporary Japanese art from the 1950s, 1960s and 1970s, including a postcard from On Kawara to John Baldessari.  By appropriating the work of his predecessors, he is staking out his own territory and continuing an individualistic body of easygoing yet abstruse work that increasingly feels like cultural translation—a point apparent in his admission in an interview with museum-goers that he likes California rolls more than traditional sushi. It’s an apt metaphor for his oeuvre: east meets west; comfortingly uncomplicated; and no one knows exactly where it comes from.